When you use a custom template for your APEX application and you want to use an image on a button, you might encounter a small, trivial bug. Thanks to Anthony Rayner and twitter for a simple workaround. The Setting 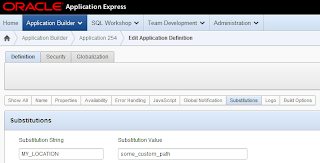 Why would you want to do this? Instead of having your custom location hardcoded throughout the application, you can use this substitution string instead. When the location changes, for whatever reason, you only have to make the change in one place namely the value that is associated with the substitution string. On a site note; you might notice that the screen shots are taken from APEX 4.2, the first early adapter site in which the described bug is still present. Maybe with the final version of APEX 4.2 that this bug is resolved,.. just wait and see. For this example I will use the sample application. On page one, create a button - I created a "Page Item Button" and named it "P1_TEST".

In the Attributes section, choose for the Style the value "Image".

In the screenshot above, I picked the image called "e.gif", one of the images that reside in the "/i/" folder. When you run the application, you can see the button with the image.

The image itself is irrelevant for this example, you might recognize the image. This image is shown when you run the page with the edit-links visible - but this is besides the point. The point is that it works as expected.

Look at the generated HTML (I use Google Chrome to inspect items on the page, F12) and you can see that the src attribute for the image is "/i/e.gif". The Problem

In the screenshot above you can see that the src attribute is "/i/&MY_LOCATION./e.gif", nearly the same as it was entered. The Solution

The image will then show up as you expect it to.

What can you learn from the screenshot above? Not that the image is still broken, but you can see that the src attribute for the image does have the substitution string value in it, just like you would expect it to have.

This bug was confirmed by Anthony Rayner with bug number 14197492, and he showed the workaround proposed in this article in a short twitter message.

Email ThisBlogThis!Share to TwitterShare to FacebookShare to Pinterest
Labels: APEX